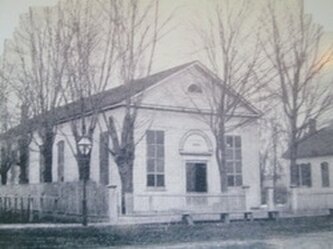 ​​The first church was built on the corner of Randolph and Putnam in June 1856. It was 30 feet broad and 42 feet long at a cost $1600. Americans in town had given about $600 to the newly formed Swedish congregation to help with the building costs. After two years of visiting pastors serving the congregation, Pastor Esbjorn with his family moved to Princeton to become the first resident pastor.

In the summer of 1865, the Augustana Synod met in Princeton with so many people the church overflowed and filled an outside house.  By 1868, the congregation had grown to 226, so the church was enlarged by moving the north part out 36 feet. The Lutheran Church in Wyanet belonged to our congregation and Pastor Lindholm preached there one Sunday a month.  They became a separate congregation in 1875.

Because of a constitution adopted in Andover in 1870, over 80 members left, which hurt the congregation, but growth continued.  In 1872, a parsonage was built at First and Mechanic Streets.  Three years later, a Swedish school was built next to the church.

In 1883, the Lutheran congregation in Putnam asked that the pastor visit them one Sunday a month, twice a year in the forenoon and the other Sundays afternoons.

That same year, a committee was appointed to consider building a new church and money was gathered for that purpose. A new brick church was built on the corner of Putnam and Pleasant Street, at a cost of about $10,000. The cornerstone in the southeast corner of the church was dedicated in 1890. The church followed a cross shaped design with a tower 110 feet high including the spire.

In 1895 a church bell was purchased and placed in the tower. An organ was purchased in 1902 and improvements, including a porch, were made to the parsonage. ​
Up to this time, services were conducted in the Swedish language. In 1901 it was decided to add an English service one Sunday afternoon a month and to offer confirmation in English to those students who couldn't read Swedish. 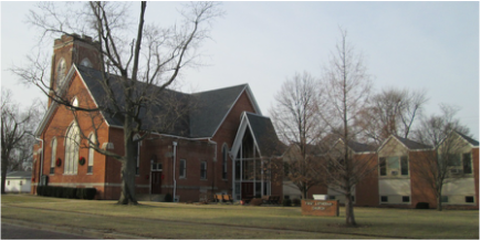 ​​In 1964 an educational unit was added to the north side of the church. This building houses a meeting room and church library, a nursery, Sunday School rooms, secretary's office, Pastor's study and rest rooms.

In 1978 a new altar rail and pews were added and the sliding doors were removed to enlarge the sanctuary.

​​In 1991 an elevator entrance was added on the south side of the church, making both the sanctuary and the basement wheelchair accessible.  A covered drive for the elevator entrance was added in 2015.
After much study and prayerful deliberation, the congregation voted to leave the Evangelical Lutheran Church in America in 2011 and join the Lutheran Congregations in Mission for Christ, an association of Lutheran Churches that is more closely aligned with traditional Lutheran theology.

Through the years we have changed the physical building to meet the needs of the congregation and have changed languages as Swedish immigrants became English-speaking Americans. We continue to adapt to the times, but through it all our mission has not changed: We preach Christ crucified for our sins and a God who loves us enough to have sent him. We reach out to our neighbors to share this good news.